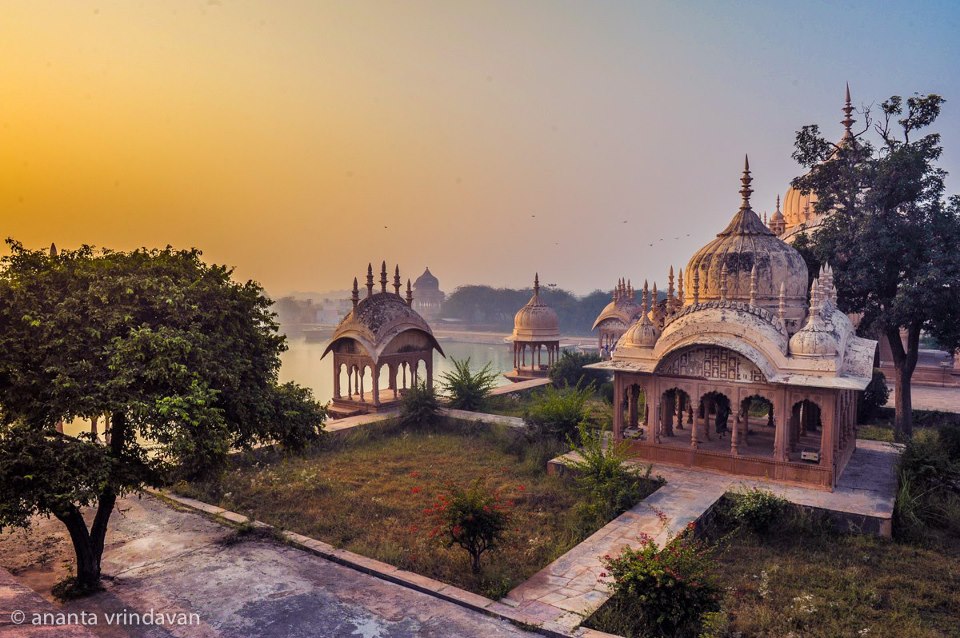 "Vrindavan is non-different from Krishna Himself. It is the expansion of Krishna's internal potency. Lord Balaram, the original spiritual master, expands Himself as the abode of Vrindavan. 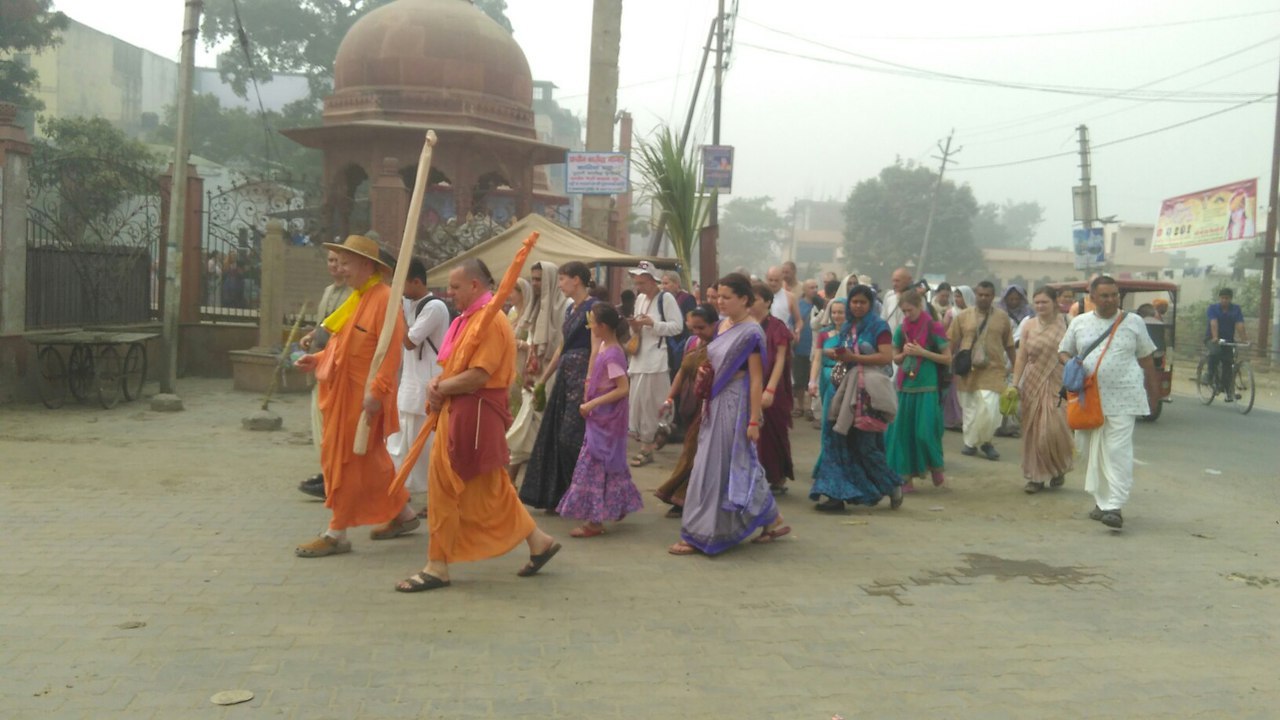 As a nation may establish an embassy in a foreign country, Lord Sri Krishna brought down His eternal spiritual home of Vrindavan and placed it within India, ninety miles southeast of New Delhi. Although the French embassy stands in New Delhi, for example, it is not subject to the laws of India. Similarly, according to our material vision, Krishna's eternal spiritual abode appears to occupy part of India, but factually Vrindavan exists transcendentally beyond all the laws of the material world. 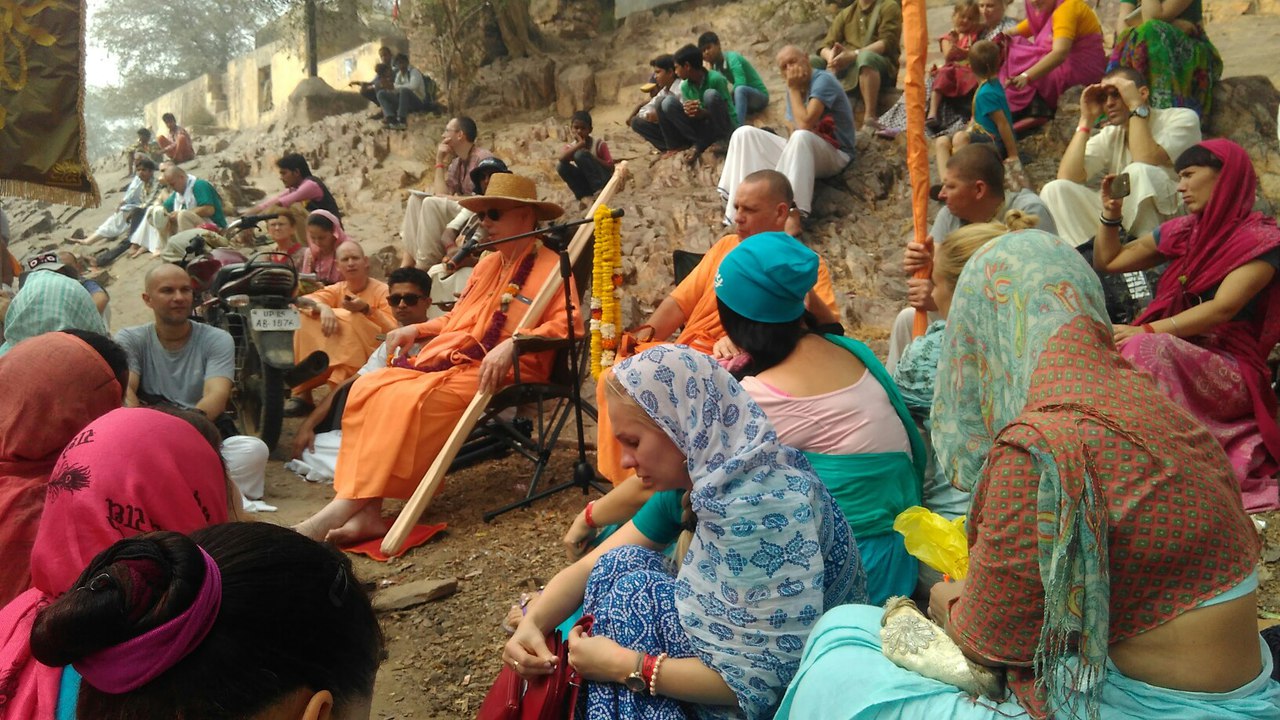 When I arrived in the beginning of November I became very disturbed by the external plight of Vrindavan town. Due to my mundane vision Vrindavan appeared to be in a dilapidated condition. I saw diseased dogs, sewage overflowing into the street, plastic bags piled up and being eaten by cows. I saw poverty and lack of sanitation. The sacred river Yamuna polluted by local sewage and garbage, and heavily congested numbers of cars and bikes polluting the atmosphere.   However, the apparent filth of Vrindavan is an illusion behind which Krishna is eternally performing His pastimes. From the example of our acharyas we should see Vrindavan not through our eyes but through the faith in our hearts. This faith is awakened by hearing from the holy scriptures and the great devotees of The Lord. 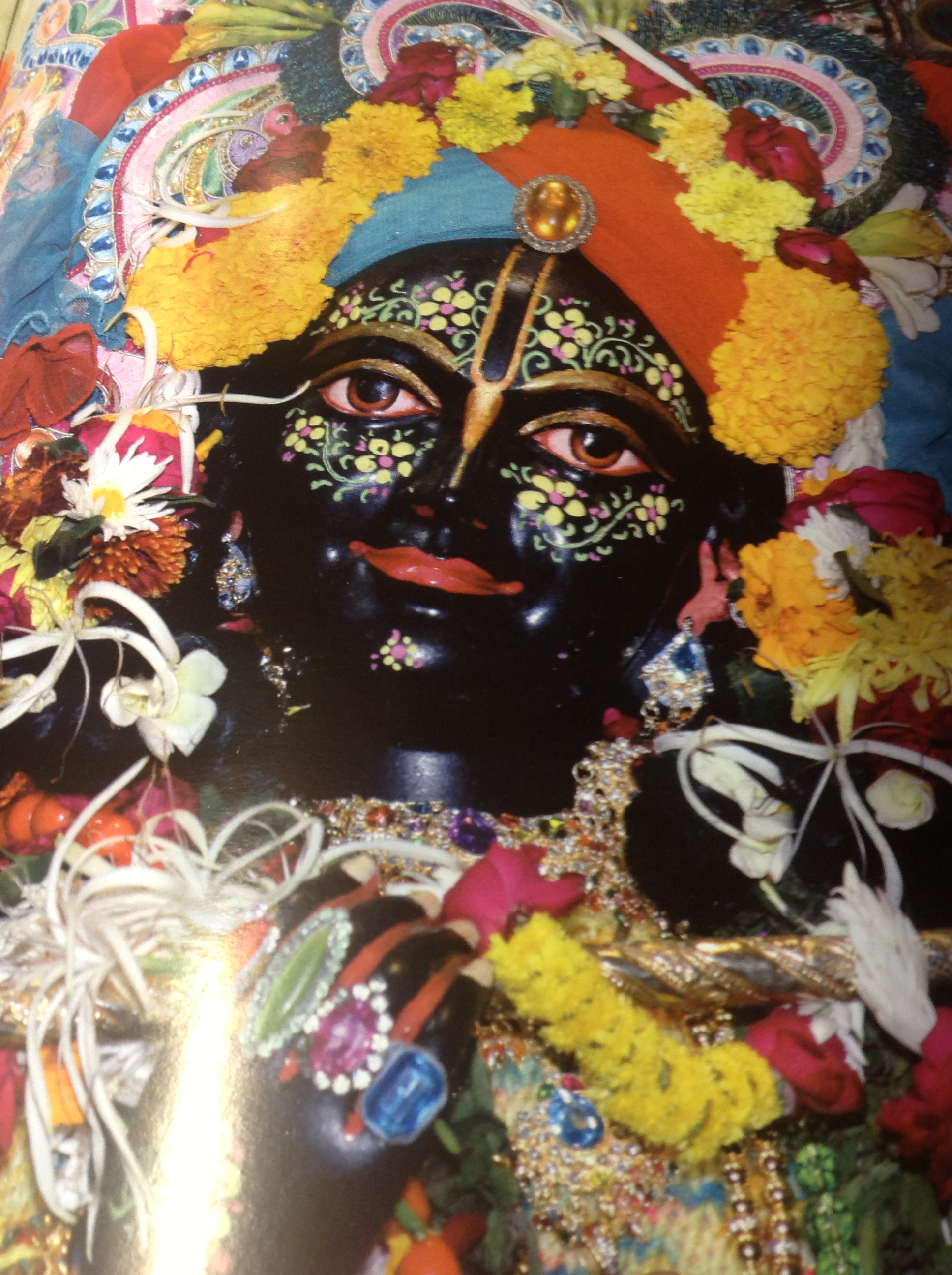 Srila Prabhupada explained, "If you approach the Deity as a piece of stone the Deity will appear to you as stone". Similarly Vrindavan- dham will reveal itself to us according to the mode in which we approach it. Lucky for me I had come to India to immerse myself in Bhakti Chaitaya Swami's Vrindavan and Govardhan parikrama. 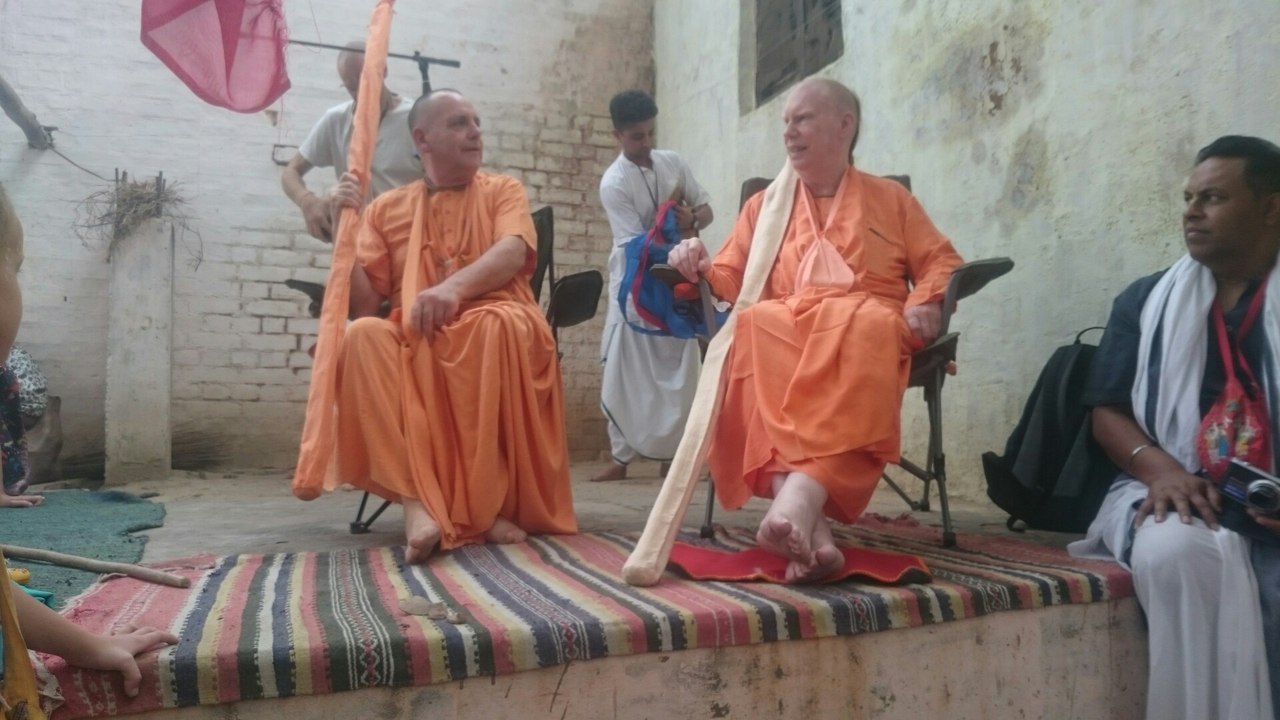 In the Padma Purana it is said, "To travel to different places of pilgrimage means to attain emancipation from material bondage. Then after attainment of the brahma-bhuta stage of liberation, one can further advance to engagement in pure devotional service. This can be achieved very easily for one who lives in a holy place."

The holy dham is situated transcendentally. Otherwise, there would be no possibility of invoking our transcendental sentiments in these places. They arise immediately and without fail after one arrive in the dham. I noticed this phenomena myself after four or five days on parikram. I felt my consciousness changed and I started to see Vrindavan differently.

Here are some of the places Bhakti Caitanya Swami guided us to and then explained the significant and different pastimes of each place: Kaliya ghat, Madan Mohan Temple, Damodara Temple, Radha Gopinath Temple, Radha Gokulananda Temple. We went to Gokula, Kamyavan, Varsana, Govardhana, Radha Kund and Jaipur. A great majority of people see Lord Krishna in a relative way. It is nice therefore to go to a holy place where there are many reminders and memories of the Lord’s appearance there. This enables us to directly remember Him. We can then return back to our preaching areas, spiritually charged, and again ready to serve the gurus mission. 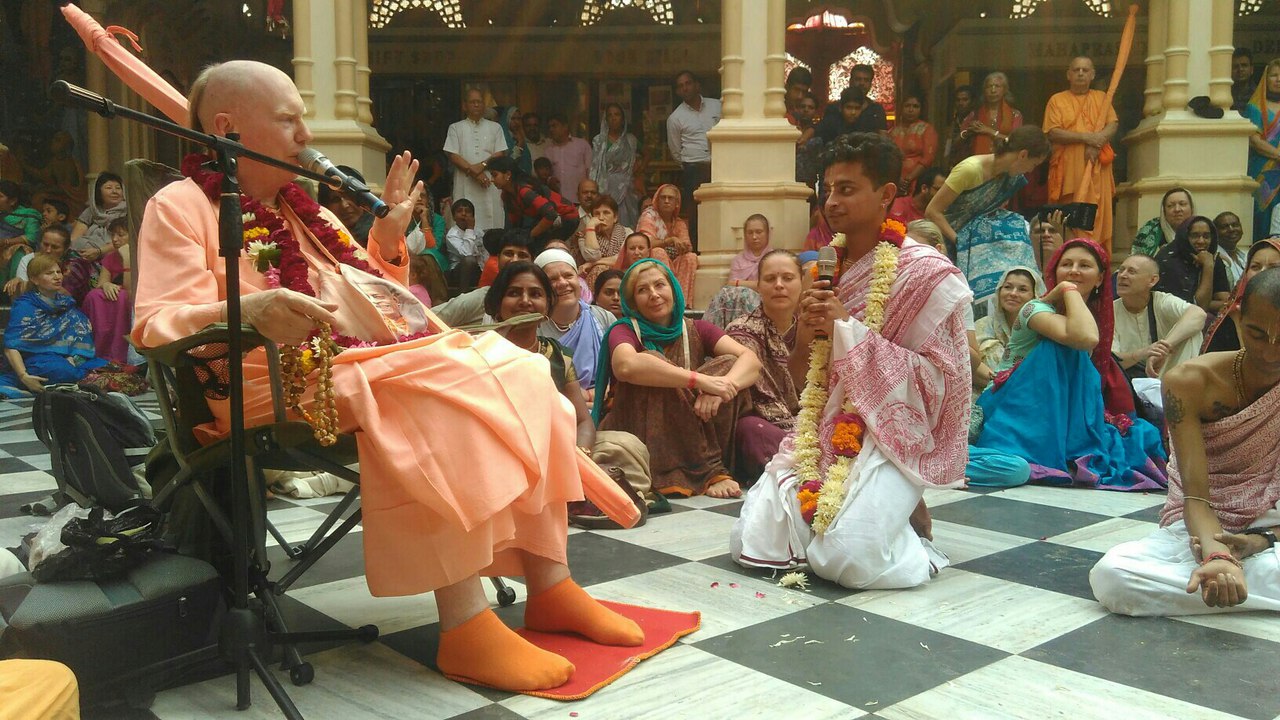 Srila Prabhupada wanted the devotees to visit Mayapur and Vrindavan each year to recharge their spiritual enthusiasm for service to Krishna. He call these places embassies of the spiritual world. However a temple president once pointed out to Srila Prabhupada that it is very expensive to take all the devotees each year to India. His reasoning was we could save the money and it could be used for preaching.  Srila Prabhupada said, "there are other ways to save money. You could save money by not eating. You do not need to eat. You can serve every day without eating."   He was pointing out that as much as we need to eat to give nourishment to the body we also need to nourish the soul by going regularly to the holy dham. 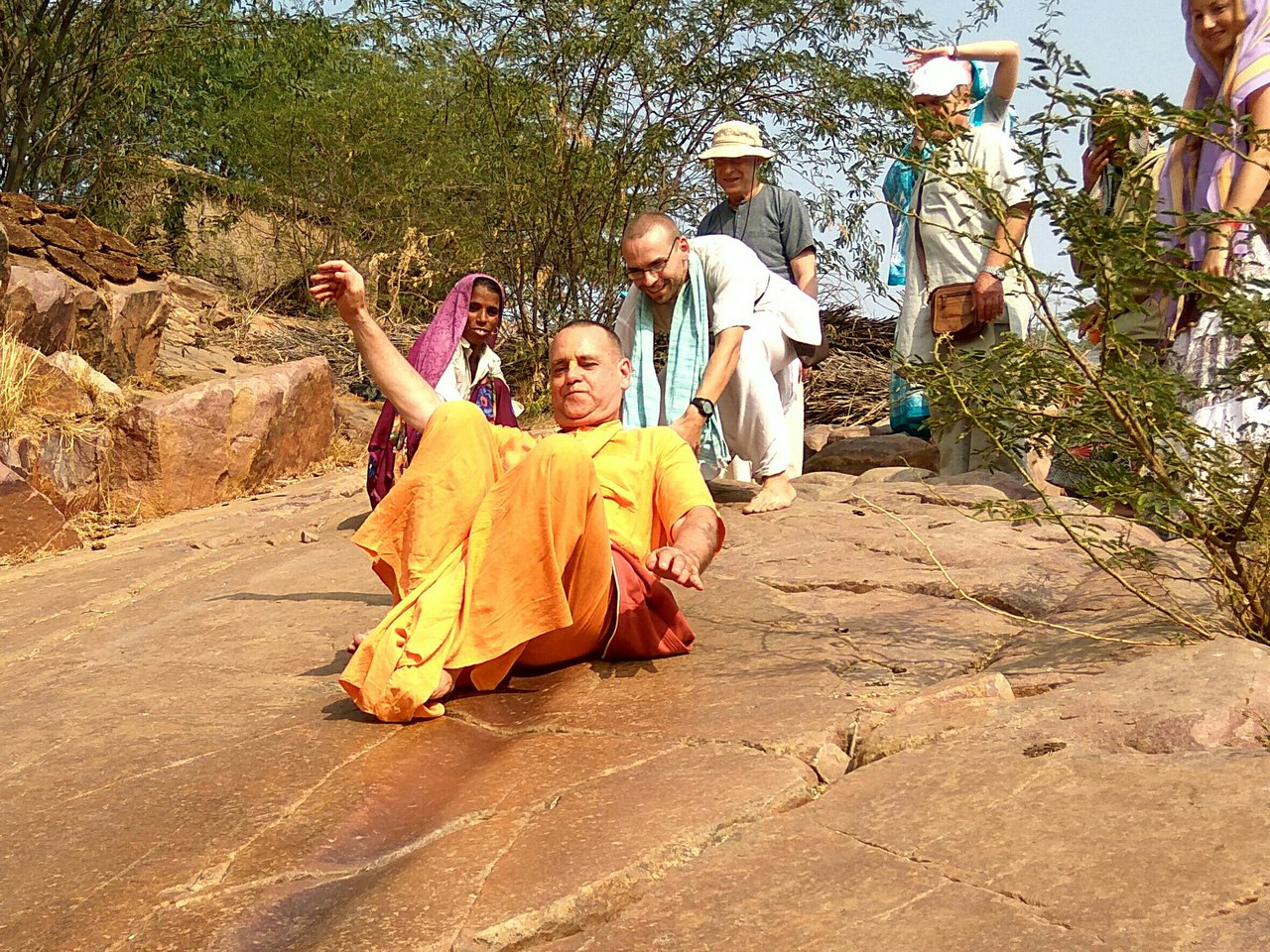 Rupa Goswami has written, “If it is possible one should go and physically be present in Vrindavan, and be engaged always in the service of the Lord. If it is not possible one can meditate anywhere upon that situation. Wherever one may be, one must always think about life in Vraja-dhama and about following in the footsteps of a particular devotee in the service of the Lord. In this way we can always live in Vrindavan, even within the mind. This will liberate us from material contamination." It is clear from this statement that a qualified devotee can convert any place into Vrindavan. 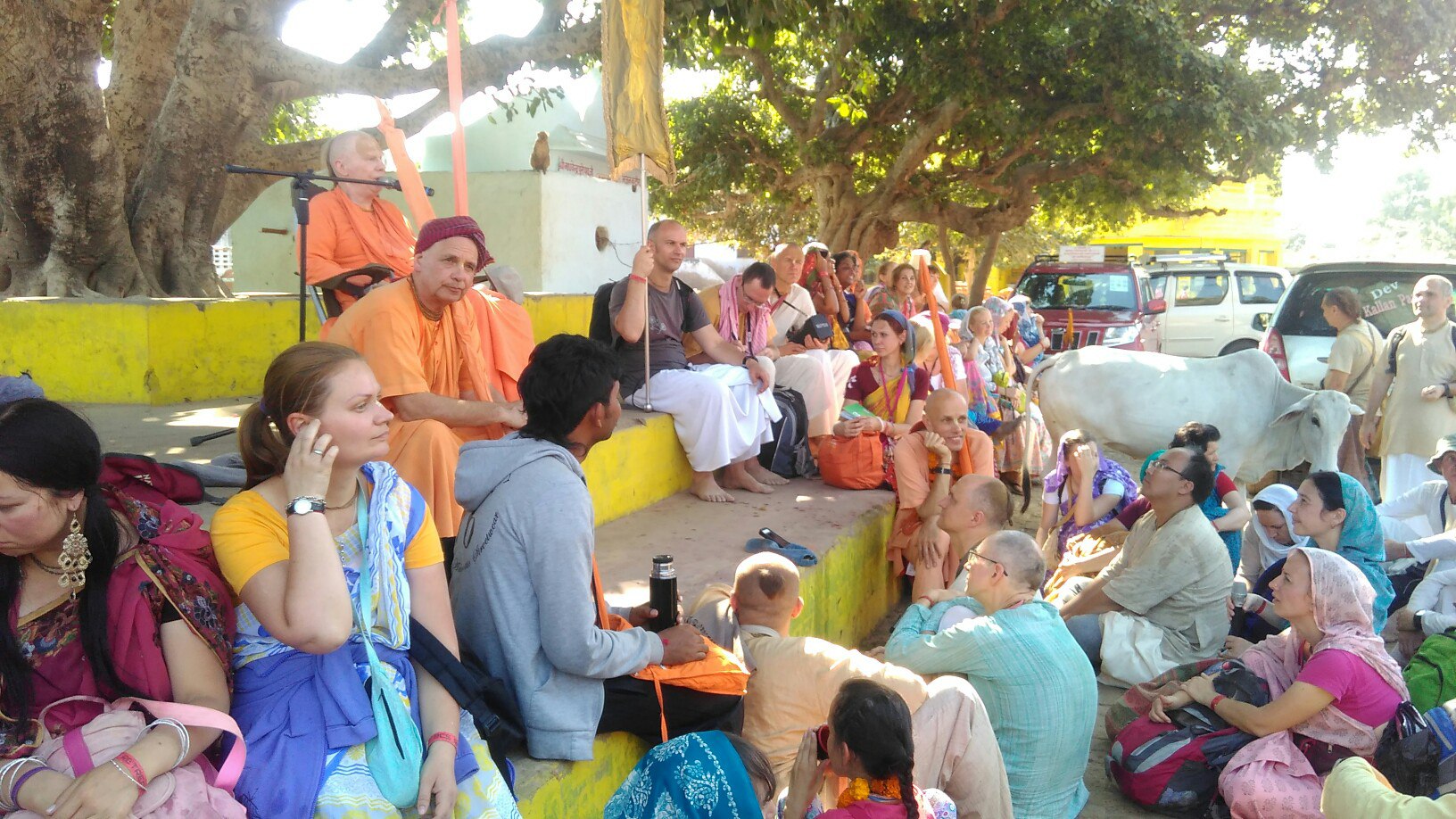 When the parikram finished I remained in Vrindavan for a few more days before returned to Europe. Krishna in His own sweet and mystical way arranged that I returned with two of Bhakti Caitanya Swami's parikram publications - "Vrnavana - The Playground of God" and "Govardhana - the Hill that Fulfills all Desires." Now back at my base in Lithuania. I can again immerse myself in these same holy places and experience an everlasting parikrama never to end. 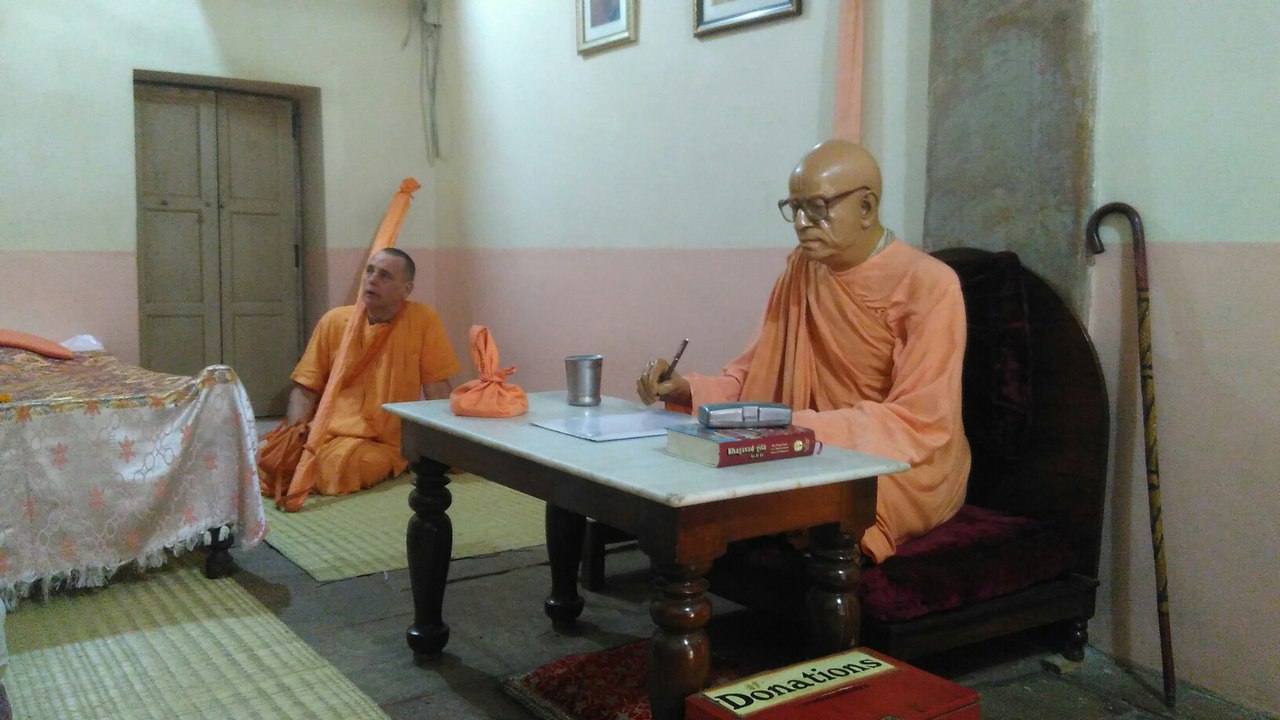 Srila Prabhupada explains, "If one simply follows the instructions of Srī Caitanya Mahāprabhu, under the guidance of His representative, and chants the Hare Kṛṣṇa mantra, teaching everyone as far as possible the same principle, the contamination of the materialistic way of life will not even touch him. It does not matter whether one lives in a holy place like Vrindavan, Navadvipa or Jagannatha Puri or in the midst of European cities, where the materialistic way of life is very prominent. If a devotee follows the instructions of Sri Caitanya Mahāprabhu, he lives in the company of the Lord. Wherever he lives, he converts that place into Vrindāvan and Navadvipa. This means that materialism cannot touch him. This is the secret of success for one advancing in Kṛṣṇa consciousness." Dhirasanta dasa Goswami 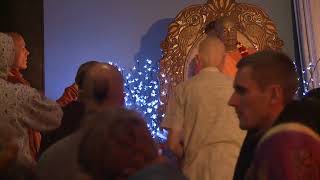