Money and an Illusory Sense of Security

Ownership of something means total control of its existence from beginning to end. When we pay for a piece of land, we feel that we own it, although the land continues to exist even after the owner is long gone. How can you own something that outlives you?

Ustad Bismillah Khan the Shahnai maestro had a personal encounter with Sri Krishna in spite of being a Muslim. The legendary Ustad had great respect for Sri Krishna; and that could have prompted the merciful Lord to appear to him in person.

An atheist professor of philosophy speaks to his class on the problem science has with God, The Almighty.

There was a king who was a great admirer of art. He encouraged artists from all over his country and gave them valuable gifts.

Thus a person is impelled to accept one body after another according to his desires and actions. Such a person being attached to his material plan-making business spends all his time in bodily consciousness and continues to go through the cycle of birth and death.

Once there was a man who liked to eat mangoes. One day he decided to get the sweetest mango available, from the very top of the tree. Mangoes which are most exposed to the sun are the sweetest. So he climbed up to the top, where the branches were thin, he managed to pick up a few sweet reddish fruits, but in attempting to go back down, he slipped and started falling towards the ground.

To Hear the Unheard

Back in the third century A.D., The King Ts'ao sent his son, Prince T'ai, to a temple to study under the great master Pan Ku. Because the Prince T'ai was to succeed his father as king, Pan Ku was to teach the boy the basics of being a good ruler. When the prince arrived at the temple, the master sent him alone to the Ming-Li Forest. After one year, the prince was to return to the temple to describe the sound of the forest.

A neighbor who visited a farmer and his wife every day noticed a new horse. He said, "Now you have a horse, this is wonderful, now you can do so much more work on your farm."

Willingness to Confront our pride

Once there was a young American martial arts student who became fascinated by the discipline of Shaolin. Shaolin temples are famous for their methods of teaching martial arts and are intriguing because of their secrecy. It was no surprise that he soon found himself in China, the home of ancient warriors.

Absorption in Krishna is Natural

Once a young man visited Transylvania, the home of the legendary Count Dracula. To spend the night he visited a lonely guest house in the Romanian forest. Tired, he went to bed, only to experience a night of unforgettable horror.

There was once a wise man who used to go to the ocean to do his writing. He was a very special person because he combined the best of two cultures, he was a scientist and a poet, and from these two perspectives he wrote insightfully and beautifully about the world and our role in it.

Plug-Stoppers on the Path of Perfection

The practitioners of bhakti or devotional service to Krsna, especially those that are initiated, vow to follow four regulative principles. These are no intoxication, no illicit sex, no meat eating and no gambling.

A Struggle against Superior Arrangement

In the Shanti-parva of Mahabharata there are many instructions by Bhismadeva on morality and religiosity. Here is a glimpse of the conversation between Yudhisthira and Bhisma

The Lake of Death

Once the Pandava princes were walking in a deep forest and got lost. Finally, after many hours of walking they became exhausted and thirsty, and decided to rest in the cool shade of a tree.

Many hundreds of years ago in India, Birbal was the chief minister of the great Emperor Akbar's court. Although his wisdom and sense of humor made him popular, other members of the court were jealous of Birbal's position.

The Bhagavata Purana is the topmost pure Purana and provides solutions for the problems of the world. Although it was compiled fifty centuries ago, it foretold many events taking place today, and even those that are yet to come.

While writing this, my music CD got stuck and started to repeat itself. I was reluctant to get up from my writing and after some time I decided to order Krishna to fix the problem. To my surprise He did just that, within two seconds of asking Him the sound became normal.

What Are We Eating?

In the west especially there is so much food available, we can go to a variety of supermarkets and buy foodstuffs from all over the world. Others are not so fortunate; but how great is this apparent freedom of choice?

A song by George Harrison

Yamaraj is the demigod who records all of our pious, as well as evil deeds. Once, the servants of Yamaraj approached him and complained about something which they were very concerned about. Here is the conversation between Yamaraj and his Yamaduta servants.

Doctor of the Soul

O doctor of the soul, O master of the mind
Your precious benediction is very hard to find

"GET UP AND WIN THE RACE" 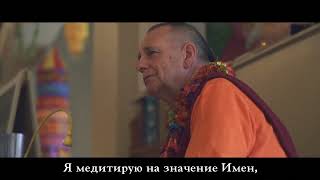